I have just returned from a short break in Dorset when I took opportunity to briefly visit Chaffcombe where I lived until the age of 5 years in the 1950’s. We lived in Church View Cottage as it was then called – the first cottage on the left of Knapps Lane. My parents were John and Geraldine Munday and my father worked at the National Provincial Bank in Chard and my mother was an active member of the WI. Both my sister and I attended the village school and my sister also attended the grammar school in Ilminster. We moved to Southampton in 1958.

What particularly piqued my interest was finding out on Google street view that the cottage had recently been sold and being able to view the sale details of the cottage and see around inside as well!

Anyway on my return home I discovered the Chaffcombe website and on seeing your photos remembered I had some of my own so I am forwarding copies on to you in the hope that they will be of some interest.

I was also intrigued to find a holiday cottage in the village so may well come and visit again as I have many fond memories of the freedom I enjoyed as a child growing up in Chaffcombe. 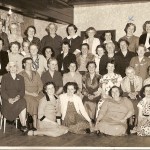 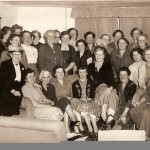