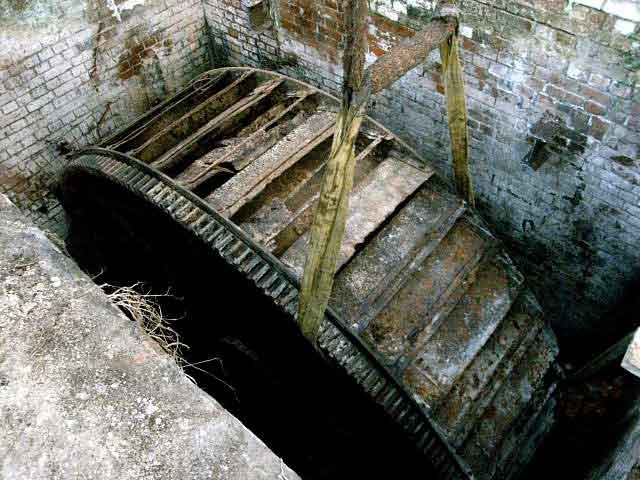 William Sparrow Engineers also made wheels at Madey Mill and Woodhouse Farm, Knowle St Giles thus making the Chaffcombe Waterwheel one of a very small group of surviving waterwheels from the Martock foundry.

It is well over a century old, is a rare example of a locally cast wheel and was the subject of early experimental electrical generation at the site.

The ‘Model Dairy Factory’ of the Somerset, Dorset & Devon Dairy Co. Ltd was built by Earl Poulett in 1890 below the dam of the canal reservoir to take the surplus milk from the estate’s farms to make butter. The churns, etc, were worked by this waterwheel using water from the reservoir, with a steam boiler to scald the cream and sterilise the churns. The butter was stored in two 30ft square rooms, kept cool by the stone floors being constantly flooded by water pumped from the factory’s own deep well.

The governor to control the penstock was added when DC electricity was generated making them the first premises in the whole area to be lit by electric light.

This factory was taken over by Messrs Salter & Stokes Creamery at Chard Junction and was closed when they, in turn, were acquired by Wilts United Dairies in 1930. The buildings of this factory at Chaffcombe stayed vacant until 1940 when Mr B Rogers of Wreath Farm, Crewkerne Rd, Wreath, near Chard, Somerset transferred his very successful cider making business there from his farm at Wreath. His cider making business was started in 1912 at Wreath and had gained many national awards and had grown to such an extent that new premises had to be sought. Hence the purchase of the old butter factory buildings. This cider making business continued until 1967 when the mill was closed.

This overshot waterwheel continued to be used by Mr Roger’s son and was still in situ at the beginning of 2010, as was the governor although in a very dilapidated state.

This cider factory was called ‘Sunshine Cider Mills’. The premises then became a council depot. The South Somerset District Council depot closed in 2009 and was leased to Messrs. P & J Dearden (Chard) Ltd.

Some pictures of what faced Rowland Butler and Peter Loader and the condition of the wheel in its original working place can be found in The Story Of Chaffcombe Water Wheel.

Water Wheel Given To Chaffcombe 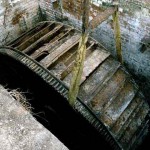 Being taken out of original position

Eventually, the waterwheel was given to Chaffcombe via Mr Loader on the understanding that he and others would remove it safely from the site. The appropriate planning permission (with plans drawn by Mr Butler) was sought from South Somerset District Council and the Environment Agency and granted to Mr Loader and the waterwheel was taken apart and brought to Mr Butler’s premises for restoration.

Mr Rowland Butler has taken over a year to complete the restoration with the help of many volunteers from the Parish and it is now in working order and situated in Mr Loader’s wood on the outskirts of Chaffcombe. Sadly, Mr Peter Loader is not around to see the finished item having passed away last October.

(The above has been sought from the following and it is hoped all the information is correct).

1. Mills of the Isle by Derrick Warren

3. Visit to and chatting with Mr Rex Rogers, son of Mr B Rogers.

Restoration of the Chaffcombe Waterwheel

This all-steel waterwheel was installed with the top of the wheel at ground level in its original location. The overshot wheel was probably set as low as this because of the adjoining mill pond to access water at that level. The mill pond later became a top-up reservoir for the canal.

A brick built building was erected over the wheel to shelter and make safe such a deep excavation with a lockable door. The main water feed was controlled initially from a sluice gate approximately 30 feet from the wheelhouse. Water was fed through a brickwork tunnel to the penstock over the wheel where the water was further controlled by a sliding shutter which in turn operated by a rotating governor consisting of two heavy cast-iron weights by centrifugal force expanding as the wheel increased in speed via linkage which closed the sliding shutter thus restricting the water flow maintaining a constant steady speed. (As the workload increased the action of the governor would momently slow down thus opening the shutter and allowing more water to flow, therefore, maintaining the original speed.)

The wheel itself is 15ft in diameter by 4ft overall (including ring gear) and was in a very sorry state upon removal.

Parts of the waterwheel salvaged were:

1.  The wheel itself was made of 16 segments which bolted together to  form the wheel rims – of these only 7 was intact.

2. The 2 steel cast-iron hubs were in good condition which housed the spokes.

bearings were intact but there were no useable bearings. (The new phosphor bronze bearings were made at Bridport Foundry and machined by Rowland Butler in his workshop)

5. The large cast ring gear bolted to the side of the wheel – 6 segments of 8 were intact (these being made of cast-iron) 2 segments were broken. These were cast welded and steel plated.

6. The sliding door and some mechanism at the end of the penstock were in salvageable condition.

7. The driven gear, approximately 30” in diameter, was in good condition as was the shaft.

8. This shaft was carried on roller bearings which were also in good condition but needed refurbishing.

9. Some pulleys were reusable.  A large flat belt pulley was obtained from elsewhere for demonstration purposes only in the new location.

10. All the nuts and bolts were of no use as most were crystallized from age and in a dangerous state.

2. The journals were machined at my workshop, 4” in diameter by 5” to receive the phosphor bronze shells. These are lubricated by a wick-system (when installed) through grooves cut in the uppermost shell from oil boxes situated on the main bearing blocks.

4. Support cross stays, 16 in total, were all straightened and refurbished including the removal of the threaded section (approximately 10” long) and welded on replacement 1” threaded bar to all stays.

5. Underlining of wheel was cut from 3/16 galvanised sheet steel.

6. All of the buckets were made from the same material as the underlining – 48 buckets in total, all pressed and machined.

A brief description of new installation – completed May 2011

A new wheel pit was excavated and lined with concrete block walls, concrete floor, outlet pipe to the stream.

In the new installation half of the wheel is shown above ground level. The penstock is fed via an underground 6” diameter pipe, 154m away from the wheel site.

A holding pond was excavated. A large sluice gate was constructed to close stream to enable the pond to fill. The 6” feed pipe enters pond at low level and at its head has an adjustable sluice gate. Upon opening this small sluice gate water levels between the pond’s 6” inlet pipe and the top of the penstock is approximately 2 metres difference. Thus water fed down via the 6” underground pipe rises up a vertical pipe housed below the penstock, discharging into the penstock.

All of the reclaimed steelwork was shot blasted and oxide painted.

Paint finish as chosen by the late Mr Peter Loader:

The total restoration took approximately 14 months to complete, equating to approximately 1600 hours (my works) not including the many volunteers of the Parish who has put in many hours to help at my workshop and indeed in the woods. Without their help and encouragement this may have not been completed! Thanks to all of you. 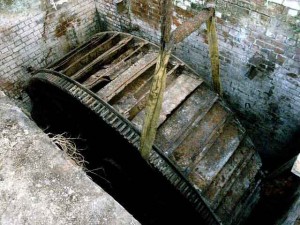 Being taken out of original position 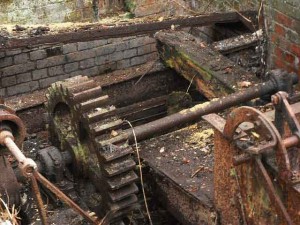 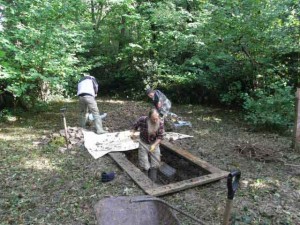 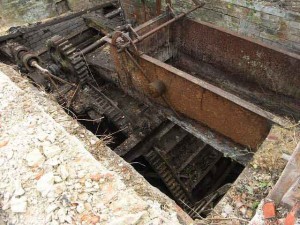 Some of the machinery exposed 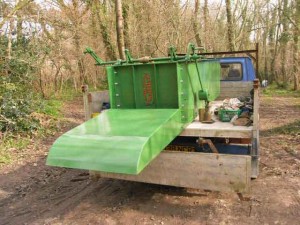 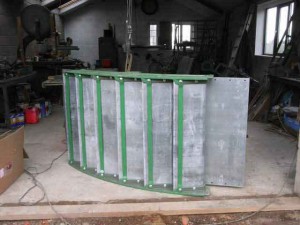 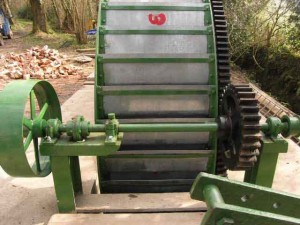