At the laying of the Foundation Stone , little 9 year old Elsie Willmington presented a handsome silver trowel to Miss Hartley, with a few appropriate words, as a memento of the occasion; and with it a decorated scroll executed by Mr Mansfield-Haysom (Chard) and containing the names of the Working Committee, whose present it was.

In return Elsie was presented with a 1910 (the year of her birth) gold sovereign coin on a gold chain.   This gold sovereign necklace is now in the capable hands of her daughter, Avril, who kindly let us take a photograph of it. It is still in its original box and Avril still has the pleasure of wearing it.     Elsie lived a long life having died in 1993.

Given away by her brother Mr T Willmington, the bride wore . . . .

There were two bridesmaids, the Misses Muriel and Olive Willmington, sisters of the bride.

Mr Jack Richards, friend of the bride and bridegroom was best man. 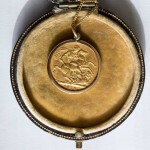 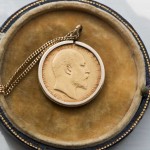 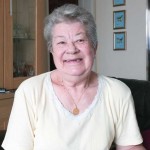