The majority of Chaffcombe ringers spent Saturday 6th October 2012 ringing at three towers in Somerset as part of our annual ringing outing.   The towers were Baltonsborough, West Lydford and Charlton Mackrell.   In total 15 ringers rang with 3 cheerleaders!   At this stage we would like to thank Alan, Jane, Terry and Johan for coming along to help us.

We started our annual outing at about 9.00 a.m. to reach the first church at Baltonsborough ready for ringing at 10.00 a.m. 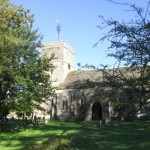 We were met by a  Baltonsborough ringer who showed us the ropes!!!   It was a little daunting to find the bells so heavy to pull off but we managed it and then the bells were easy to ring.   We were able to ring rounds and call changes after which the more experienced ringers rang a touch of Grandsire. 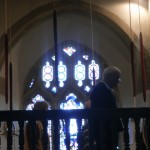 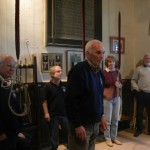 The ringing tower at Baltonsborough

By the time we left this church at around 11.00 a.m. the sun was shining and it was a pleasant day.

Our next church was at West Lydford. 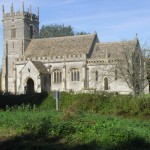 This church is in a beautiful setting situated alongside the River Brue with its waters flowing rather quickly over the weir making a beautiful sight.    The bell tower was a little cramped but we succeeded in ringing by some of us staying downstairs and then swapping over.   These bells were much 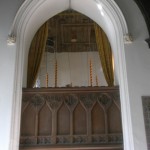 The tower at West Lydford

lighter than Baltonsborough and although deep set were lovely to ring.  We even did plain hunt on 6!!  The church itself is beautiful and full of character.    Again the more experienced ringers rang their preferred method.

We left West Lydford at about 12.15 p.m. and made our way to the Fox & Hounds at Charlton Adam for our pre-ordered lunch.   In total there were 17 for lunch. 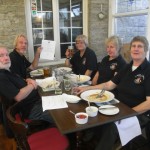 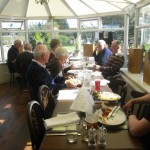 Some were still at the bar!!!

The Fox & Hounds were ready and waiting for us and we were served immediately we sat down.   The meals were very good and the service excellent.   We would recommend it.   After paying for our meals we made our way to Charlton Mackrell to ring there at 2.00 p.m.   Again a picturesque church with lovely views all around. 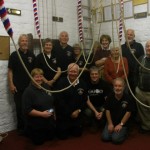 Some of the ringers at Charlton Mackrell

We had a brilliant day and everyone was happy, even little Georgina (6 years old) who came along to spend the day with us and her Dad and Rowland!!!

Who arrived on this new motorbike?

Thanks to all of you who helped us and we hope to invite you all again next year!