Hillary has just sent a cheque to C.R.Y for £200.00 being the proceeds of Marmalade and Jam sales made since lock down. All of preserves were made in advance for the planned shows which were sadly all cancelled. But Hillary and Bill persevered and turned to Facebook and online sales and wants to thank all for your continued support during these difficult times.

The Sweetest Way to Help

Buying some of Hillary’s delicious marmalade is the sweetest way to support this very deserving charity who work to prevent this disease.

Hillary still has lots of preserves made for the shows that were cancelled so please contact Hillary and treat yourself to real home-made jam. Hillary can take orders as well. You can telephone on 01460 61996 or email her on hillary.mead@btinternet.com 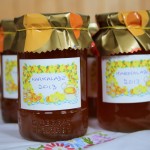 Cardiac Risk in the Young it is a humanitarian charitable organisation helping to raise awareness of young sudden cardiac death. CRY was established in May 1995 by Alison Cox MBE and is based in the United Kingdom.